Fremantle is a small port city that is just outside Perth’s central area. Fremantle is one of the most common destinations that adventurous tourists tend to visit whenever they visit Perth. Although it is a quieter region, there are different places to visit in Fremantle. A day trip is sufficient to visit Fremantle, unless you want to further explore Fremantle by visiting more attractions. Fremantle is accessible by car and train, however, the train is the best option if you are not keen on renting a car. 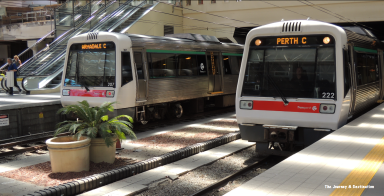 The train ride to Fremantle is around 30 minutes. Train journeys to and from Perth and Fremantle are enjoyable during the off-peak hours, which are typically on weekends and office hours on weekdays. There are great views along the way of the port, surrounding neighbourhoods and more, that are exciting to watch and snap photographs 📷

There are free maps available at Fremantle Station. It is highly recommended to collect the maps, as there are different maps from the ones in Perth. These maps also show the latest happenings at Fremantle.

🚌 Riding the public busses that operate from Fremantle Station are convenient, and you can travel around the city while doing some sightseeing from the large windows, with the comfort of air conditioning on a sunny afternoon (especially in summer). Also, the CityCAT busses are free of charge, much to all travelers’ delight as transportation will not break the holiday’s budget. The CAT busses follow two “loop” routes, namely the red and blue CATs, around Fremantle’s central area and South Fremantle from Fremantle Station. The frequencies of the busses are 10 minutes for the blueCAT and 15 minutes for the redCAT. The CAT busses are in orange rather than blue and red. The CAT (Central Area Transit) busses, as the name suggests, primarily operate within the centre of the city.

In general, the public transportation linking Perth and Fremantle and different parts of Fremantle’s central area are convenient and cheaper. It is definitely worth it to visit Fremantle!