The Newcastle-Sydney route is one of my favourite rail memories. In my opinion, embarking on rail journeys instill a different sense of excitement and fascination. Passing through different towns and admiring their beauty is special to me. And I enjoy taking trains – period. I boarded the train at Hamilton station. It’s only a couple of minutes away from the Travelodge hotel in the city via taxi. Hamilton’s a small station that’s reminiscent to the ones I’ve seen in movies – a train station in a quiet, cozy city with warm people. Additionally, it’s a heritage-listed train station and it dates back to the late 1800’s. There’s a small café/convenience store outside the station, and I recommend buying snacks and drinks before entering the station and hopping on-board the train. Eating is permitted in trains, which is great because it’s a 3-hour trip to Central Station from Hamilton and vice versa. The last thing you’ll want is a rumbling stomach in the middle of your trip!

If you don’t own an Opal card, you can purchase your ticket to Central from the ticket booth. It costs a little over $8 one way, which is a reasonable price for this trip and experience – especially with the scenic views! 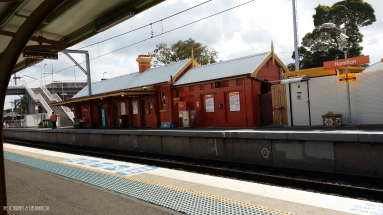 Trains in the Newcastle-Sydney area are unique. It was a “three-decker” train (that’s what I call it), with seats downstairs, upstairs and when you enter the train. The train was clean and spacious. The seats are reversible so you have the option to face the train’s direction of travel, or you can face your travel companions if you’re travelling in a group. That’s pretty awesome to me! Travelling in a train is different from being on the road – it’s my preferred mode of transport wherever I go! From footy fans (footy = Australian Rules football) decked out in their team’s jerseys, scarves and other merch who’re heading to spectate a game in Sydney, to shoppers who’re about to spend some time in the city to expand their possessions through retail therapy with friends, you’ll only encounter them on the train.

The train ride was such an amazing experience. There were gorgeous sceneries of lakes and quiet towns, which enhanced the rail experience regardless of whether you’re a nature lover or otherwise. The sceneries certainly don’t disappoint!

After staying in Newcastle for several days, arriving in Sydney feels like stepping into a different dimension as the hustle and bustle begins at the large railway station. Central station is the heart of Sydney’s train system as it links Sydney to a myriad of train services, from inner-city lines to those extending well beyond Sydney.