Butterfly pea flower tea is one of those drinks that food scientists will enjoy. Originating from Southeast Asia, it has claimed its space in social media enthusiasts’ hearts, with plenty of variations going  viral over the past couple of years. I visited The Siamese Cat, a Thai café chain in Singapore, to try a unique spin to the classic butterfly pea tea.

The words ‘Blue Hawaiian’ in front of the butterfly pea flower tea’s name brings two distinctive thoughts – the famous tropical cocktail, and the lovable, coconut cake-obsessed alien experiment named Stitch. I’ve never had a ‘Blue Hawaiian’ before, let alone a tea with an identical name. Unlike the other teas in The Siamese Cat’s menu, this tea added a bit of mystery behind the drink as its name didn’t indicate flavors like ‘lychee’ or ‘lemon’ like the others. 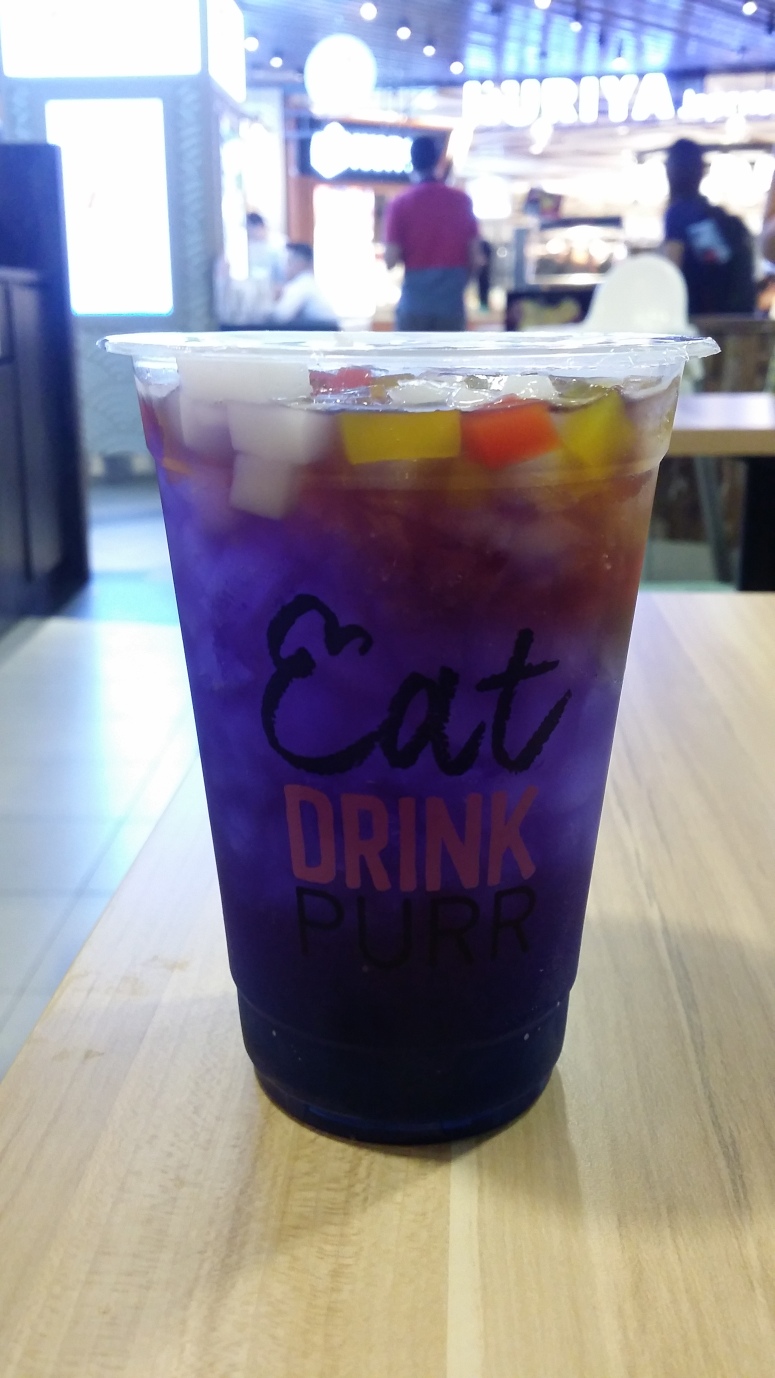 The butterfly pea flower tea is commonly found in Thai restaurants and cafes. Reading about the science behind this lovely tea brought vague memories of Chemistry lessons in high school. The originally bright blue tea turns purple when mixed with lemons, as it changes color according to pH levels of other ingredients in your drink. Mixing different ingredients after adding the tea to discover other colors sounds like a fun experiment!

Furthermore, it turns out that butterfly pea flower tea is a healthy herbal tea (when you consume it on its own, at least). It’s rich in antioxidants and vitamins, plus it’s caffeine-free.

The original Blue Hawaiian cocktail comprises of sweet and sour elements. Its ingredients tend to vary based on different recipes, but they usually include rum, pineapple juice and coconut cream. The tea sounds like it’s inspired by this drink. 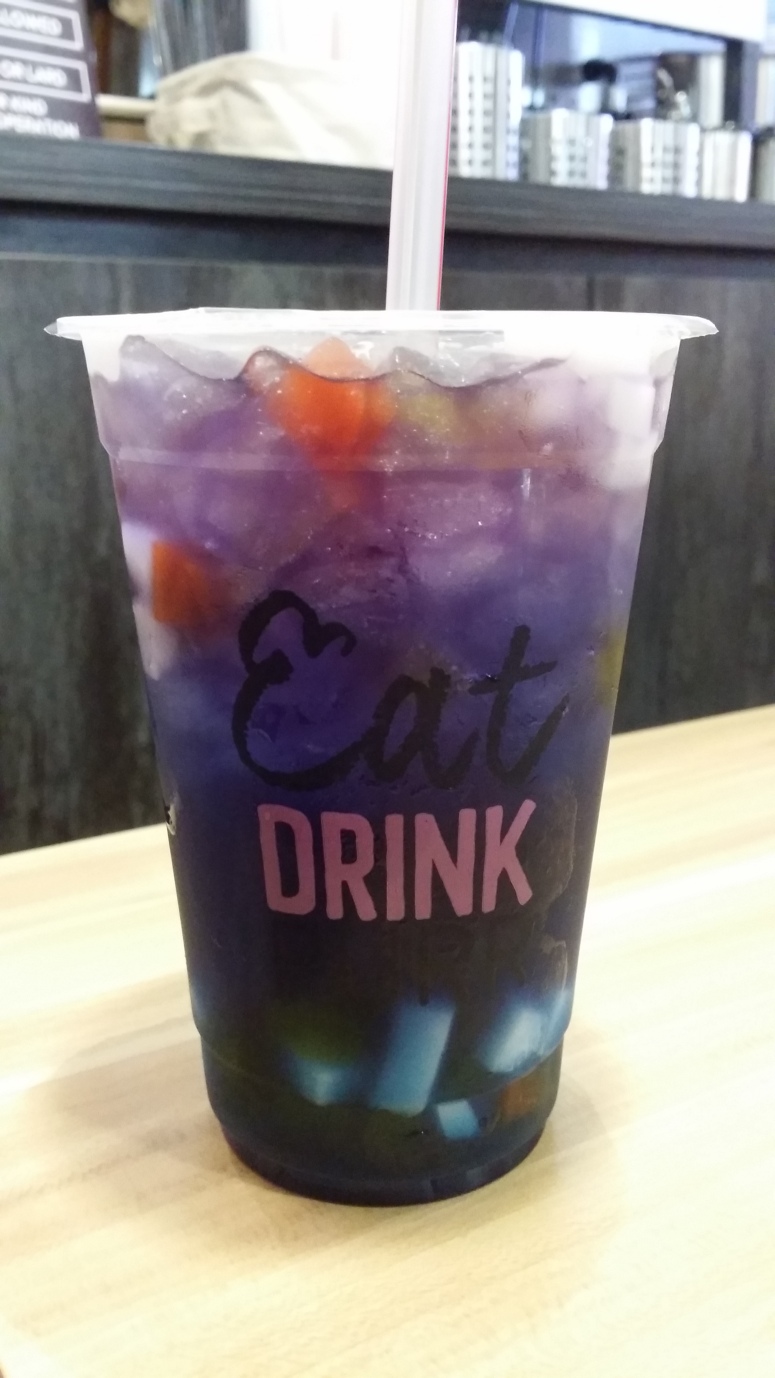 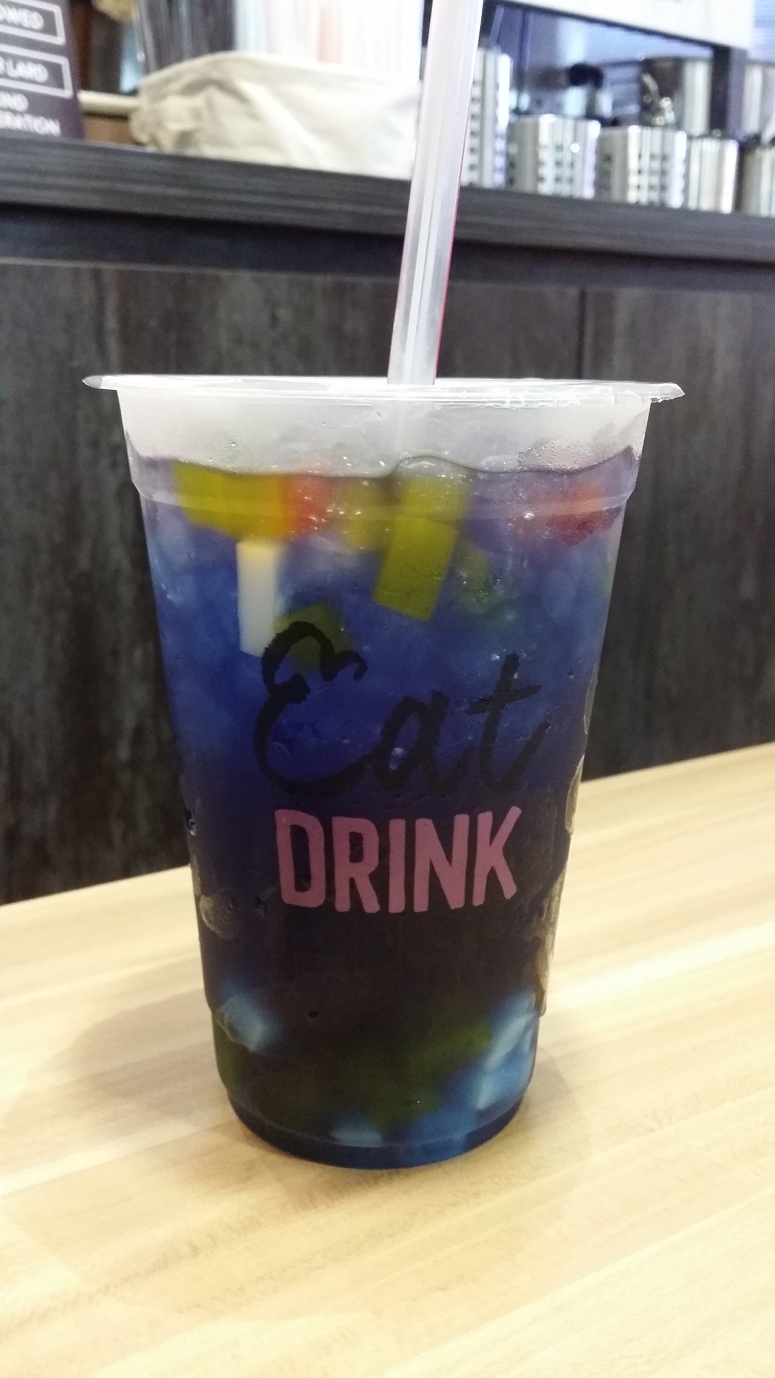 As I began mixing the pretty concoction, the Blue Hawaiian began to metamorphize into an indigo-colored drink. At one point, it reminded me of a lava lamp with both violet and indigo being visible, along with those colorful coconut jellies.

The Blue Hawaiian tea has a tropical, sweet-yet-somewhat-sour lemony cola flavor minus the fizz. There weren’t any hints of alcohol-based elements. This Blue Hawaiian is a member of the boba family instead of assuming the role of a cocktail or mocktail. Although I have more of a sweet tooth as opposed to a sour palate (I tend to avoid sour stuff whenever possible), I surprisingly loved this drink! The colorful cubes of coconut jelly was the perfect accompaniment to the Blue Hawaiian as it managed to cut through the sourness without eliminating it completely.

Overall, I enjoyed this fun tea flavor – and watching colors change in the cup was a delight too! It definitely shows that the little things along with delicious flavors add up to a great experience.